Aitrayee Sarkar throws light on one of the most comprehensive works on famous stage actor Keya Chakraborty, whose death 38 years ago, still remains a mystery

Renowned Kolkata-based theatre group Sangsmriti had published a special issue on famous stage actor Keya Chakraborty in 1995. Hers was a name once adored by thousands of theatre lovers in Bengal. Keya was involved with Nandikar and was the leading lady in many of its popular productions like Char Adhyay, Natyokarer Sandhane Choti Choritro, Monjori Aamer Monjori, Sher Afghan, Tin Poyshar Pala, Bhalo Manush, Antigone, Football and several others. She was also a popular face of Bengali cinema and lent her voice to many broadcast plays.

Keyar Boi (Keya’s book), a commemorative anthology, was published after the actor's accidental (read mysterious) death on 12 March, 1977, at the age of 38. It was edited by Chittaranjan Ghosh. Sangsmriti, later, included excerpts from that book in a special issue. Many eminent theatre personalities contributed in the Sangsmriti collection on Keya. It turned out to be one of the most comprehensive works on the late actor.

Deep Prakashan, a major Kolkata-based publishing house, recently republished that rare issue, titled Keya. It has been editied by Sangsmriti founder-director Debesh Chattapadhyay, who has also made Natoker Moto (Like a Play), a feature film on the life and works of Keya Chakraborty. His passion for the forgotten actor translated into the film, which has Paoli Dam essaying Keya's role. 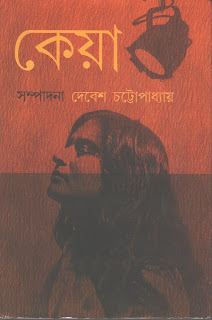 The book consists of articles on Keya by eminent film and theatre personalities like Badal Sarkar, Ajitesh Bandhopadhyay, Utpal Dutt, Tripti Mitra, Shobha Sen, Kumar Roy, Bibhas Chakraborty, Shankha Ghosh, Gour Kishore Ghosh, Jagannath Basu and others. It has theatre and book reviews, short stories, poems and essays by Keya herself. There is also a collection of news reports that were published after the actor’s death. She fell from a boat and was drowned in the Hooghly during a film shoot. It is still widely alleged that Keya's death was no accident but a murder backed by a deep-rooted conspiracy. The mystery remains unsolved.

The objective of the book is to make a befitting tribute to one of the most celebrated actors of the Indian stage. Keya Chakraborty was one of those rare actors who was ready to give up everything for the sake of theatre. Over the years, she faded from collective popular memory and today’s audience seems not bothered to recall her. Much like the typical Bengali psyche, the habit to forget the past and hesitation to avoid the truth, has passed on through generations. A bold Debesh Chattopadhyay, attempting to change that practice, deserves applause.

The fate of female stage actors have somehow remained the same in Bengal. Fears abound whether the 'trend' which started from Binodini Dasi, and continued through Keya Chakraborty, would ever change and indifference will make way for interest.