Aditi Basuroy shares her view on Masaan, the burning ghat. Food for thought and thought to conviction.

A girl and a boy want to get physical pleasure as they love each other profoundly. Due to this only, a boy has to kill himself and the girl’s family becomes penniless.  This is our India, the incredible India. It can happen in this land only. 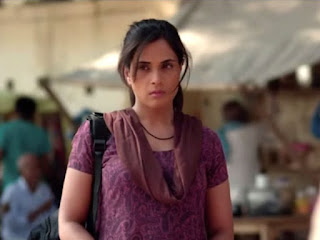 Love making is a primary and basic pleasure of life and every adult has the right to get that delight without any resistance. But our so called Indian society does not allow that with respect. Even you cannot utter that in India openly. It seems people get their children here from the heaven only. They don’t have to do intercourse or any kind of love-making for that. Such lines would haunt you forever after watching Masaan. The word Masaan means burning ghat. Director of the film, Neeraj Ghaywan simply narrates the eternal story of the Indian middle-class. The protagonist Devi is a teacher of a computer training centre at Banaras. The movie starts with she and her fellow student Piyush caught by police from a hotel room in charge of ‘indecent behavior’. All of a sudden, Piyush kills himself in the bathroom by cutting a vain, fearing social disgrace. In the mean time, the police officer takes video of the girl with his mobile phone. Then he calls her father in the police station and demands money. He threatens the old, pious retired lecturer and started blackmailing him. The film depicts two separate stories simultaneously. The hero, a young boy from Banaras, of the second story is a civil engineering student in a polytechnic college. He belongs from a low-caste corpse-burners’ family working at the burning ghat with funeral pyres. Despite being a burner by caste Dipak wants to fly high. He falls in love with an upper cast girl but his fortune spins around like a wheel and he faces a tragic end too. The film ends up in the bank of the Ganges at Allahabad where these two shuttered and tired souls meet each other and move ahead towards the sangam, in a small vessel together. The conclusion takes the film to a wide level of enlightenment. 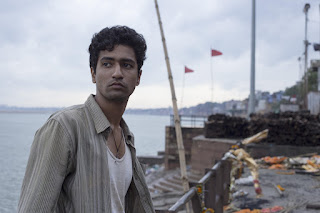 Actually, this is a kind of movie where you cannot satiate yourself before reaching the end. From the very beginning, it starts to shiver the audience. And at the same time all of us can relate with the tragic fates of the protagonists thanks to our so called civilized society. In our life almost all of us have been defeated by power or destiny some time or other. We are all familiar with that girl Devi, a representative of the rural India, who faces social stigma only because she wants to fulfill her basic carnal desire. The power play of the cops, khap panchayet and political parties remain unshaken. Here you cannot utter a single word against this corrupt and manipulative male-dominated society.

Masaan truly reflects the reality. The director shows an immense self-control by not being judgmental. He tells the story like an interpreter only, in a very apt narrative style. That is the strongest part of the movie. And the actors are ardently powerful. Richa Chadda’s performance as Devi is outstanding. Vicky Kaushal is too good as Dipak. Sanjay Mishra’s acting will drive you crazy to see how a helpless father dwells in India when his young daughter is about to face a social stigma. Mishra’s performance can easily be compared with any noted international actor.

Masaan should be a milestone in Indian cinema in terms of plot, story-line and acting. Actually, this movie carries the sing of life and hope. Despite of all social stigmas, ill-treatments, and tragic incidents finally life  rises and hope decides how to live and how to dream.