A Poll Minus Muslims in Myanmar !

Special Correspondent ● Naypyidaw : Myanmar’s Leader of the Opposition and epitome of democracy Aung San Suu Kyi has finally succumbed before the anti-Muslim sentiments of the fanatic Buddhists of the country. Suu Kyi, Chairperson of National League for Democracy in Burma (NLDB), has failed to grant poll tickets to a single Muslim candidate ahead of the path-breaking general elections to be held in democratic manner on 8 November. 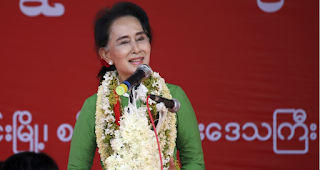 One source close to Suu Kyi, on condition of anonymity, recently disclosed that the Chairperson has directed the party not to include name of a single Muslim candidate in its list of candidature to avoid rage of the ultra-Buddhists. It may be mentioned that the final candidature list of NLDB has names of total 1151 candidates and none of them is Muslim.

Not only NLDB some other parties like Union Solidarity and Development Party,too, have decided to contest polls without projecting any Muslim candidate. Experts fear that such exclusion would only complicate the issue of Buddhist violence over Muslims in Myanmar, no matter whether democracy revives in the country or not.