Special Correspondent ● Asokenagar: Death is an element that has intrigued human mind most often. Artists have glorified the aura of death and even dared to imagine it as their beloved. The traditional Indians philosophy has always celebrated death as the beginning of a new life. And that sense of celebration has reflected in works of the great Indian artists and writers like Rabindranath Tagore. 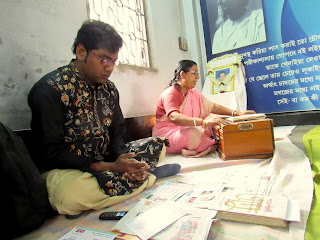 Carrying that legacy forward the Phanibhusan Smriti Samsad of Asokenagar has hosted a brilliant discussion programme, called ‘Nobiner Chokhe Mrityu' (death in the eyes of the young), at the local Samsad Bhawan on 18 December. Subhasish Chakraborty has founded the Samsad in memory of his father late Phanibhusan Chakraborty. The Samsad decided to pay homage to that great soul on his death anniversary through dissecting death from several dimensions. “The idea is to convert sorrow into art” aptly said Subhasish.

Students of schools and colleges have performed with songs, recitation, read excerpts from stories and novels to describe death as they saw it. The subjective uniqueness of the programme would certainly inspire many not to consider demise as not the ultimate end of this beautiful journey known as life.