Our Correspondent ● Kolkata: The city was about to open her arms for a late winter on that day. People had only started to enjoy the occasional chill in the air. The mist that was hindering the beloved winter to embrace the city had started to disperse silently. That was the moment when three guys began to chant the music of the season. And Abar Baithak gave them a chance to welcome the sleigh of Santa in the city through a pre-Christmas extravaganza. 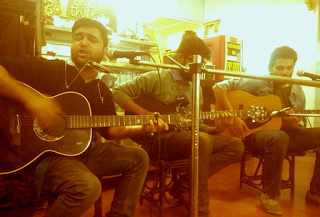 Durjoy& Friends—Samrat and Ayan—came together for a musical morning and performed more than a dozen songs on the beats of the winter on 20 December. The performance featured some vintage Bob Dylans like Jokerman and Farewell Angelina along with a number of personal compositions of the three. The audience had enjoyed new compositions like Back on Road Again and I Came Here to Sell My Dreams etc the most. The performance lasted for more than an hour and the trio had left the audience spell bound.

The man in red fur coat, sitting lonely with a chucking smile, had also left his heart there for taking. One thing is sure that he has left his chariot, his bag full of candies for us to make the world a better place to live with a musical touch.
Posted by Unknown at Thursday, December 24, 2015