'The Crowd at Abaar Baithak is Completely Mesmerising’: Timir

Our Correspondent ● Kolkata: The lead vocalist of Fakira Timir said that cafe Abar Baithak can be more popularly called only Baithak only. He further said that in their last show at the same venue on 3 January, they have performed many numbers from their album Itorpona. The numbers included Bhromor, Paal tule de, title track of the album, and many others. 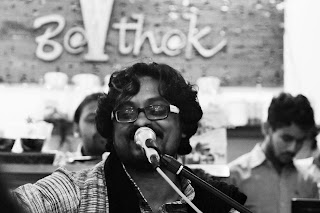 Apart from some regular songs the band also performed some unusual numbers. Appreciating the crowd at Abaar Baithak, Timir said the crowd gathered at the café was really fantastic and have provided them more zeal and encouraged them to sing more acoustic version of songs and was completely mesmerized.

Thanking the cafe authority, Timir said that Abaar Baithak has eventually emerged as a major hub of art and culture of Kolkata.