A train, some forced moments of tension between the lead pair, and two veteran actors reduced to reciting poems and complaining about the lack of maintenance in a first class compartment, is what makes and spoils Praktan, directors Shiboprosad Mukherjee and Nandita Roy’s film on marital discord. The much publicised return of the once megahit pair of Prosenjit Chatterjee and Rituparna Sengupta, turns out to be a dampener in the face of mounting expectations.

Exactly half a century ago Satyajit Ray had converted a non-story to a celluloid masterpiece in Nayak, in what became Uttam Kumar’s career defining performance, supported by a superb ensemble cast that heightened the drama. Shiboprosad-Nandita tries to tread a similar line with disappointing results. Praktan thrives on clichés that it’s the woman in a marriage who has to make compromises. 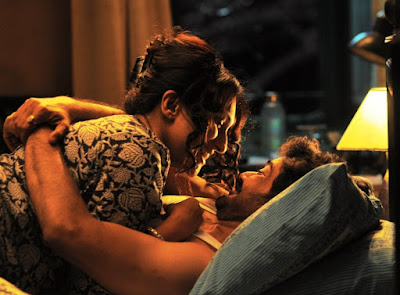 Prosenjit as Ujaan and Rituparna as Sudipa play a former couple travelling to Howrah from Mumbai. Prosenjit boards the train from Nagpur, and the two meet each other for the first time since their divorce. Till then Rituparna, unbeknownst of her, was sharing the compartment with Ujaan’s now wife Malini (Aparajita Auddy), who gives her lessons on how to survive a marriage. Sadly, none gives such lessons to Ujaan, who is reduced to a cheap chauvinist in most of his scenes with Sudipa. The film flashes back frequently for the marital discord part. The pair clearly lacks their once-electric chemistry. Their fights are hackneyed and look imposed as both try hard to emote. Interestingly their last screen outing together was 16 years ago in Rituparno Ghosh’s Utsab which had a largely similar theme of a couple trying to save their marriage. Utsab, of course, was brilliant in treating the subject in all the subtlety it deserved.

Rituparna retains her hideous front curls from Srijit Mukherji’s Rajkahini, not surprising that shooting of both the films happened at the same time. But why the directors allowed it to be repeated remains a mystery. It’s nevertheless a clever ploy of aging actresses to hide their age and look younger.

The editing too is a big letdown with visuals of either the running train, or the ticket checker used to join scenes. Unnecessary scenes, like the antakshari, ruin the film. At nearly two and a half hours, Praktan is at least 30 minutes too long.

The film has a few winning moments though. Watch it for Aparajita Auddy as the loud and garrulous second wife of Prosenjit. She steals the show along with Biswanath Basu as a gross and obese newly married man returning from his honeymoon, wife in tow. Soumitra Chattopadhyay and Sabitri Chatterjee are wasted as an elderly couple having nothing much to do. Only her typical north Kolkata Hindi elicits a few laughs.

But the film is a technical treat. Gopi Bhagat’s sweeping camerawork is stunning and so is the sound design. But some of the quarrel scenes between Prosenjit and Rituparna, at different times, are shot from the same angle, and worse still, with the same light.  The set of the train by production designer Nitish Roy is minutely detailed. Music by Anupam Roy and Anindya Chatterjee is outstanding and so are the songs.

Praktan has a wafer thin plot and is badly written. The narrative suffers as a result. None of the actors tries to restore it. There have been several brilliant films on marital disharmony, including Tapan Sinha’s Jotugriha, Gulzar’s Ijaazat, and Hrisikesh Mukherjee’s Abhimaan. All these were classics in their own right. The directors have borrowed heavily from all of them with the train journey thrown in as a connecting thread. Praktan, in the end, boils down to a collage of some haphazardly shot scenes, with the only motive to bring back the Prosenjit-Rituparna pair. Nothing more, nothing less.